The Well-being of Women in Utah 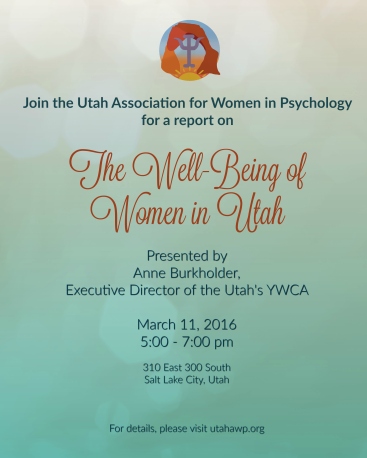 Please join the Utah Association for Women in Psychology for a report on the well-being of Utah women, presented by Anne Burkholder of the YWCA.

Women’s well-being is critical to the well-being and life prospects of others: better lives for women lead to stronger families and thriving communities.  Last year the YWCA Utah launched the Utah Women’s Well-Being Initiative, whose purpose is to advance the well-being of Utah women in key dimensions of their lives through research, education, collaboration, and public policy – so that women flourish, their families and communities thrive, and Utah prospers.  The initiative was announced when a new research briefing about Utah women was published in partnership with the Institute for Women’s Policy Research (IWPR) in Washington, DC.  Entitled The Well-Being of Women in Utah: An Overview, the briefing explores key dimensions of women’s lives such as earnings, education, and economic security; physical and emotional health and safety; and political leadership and participation.  In 2015 IWPR released its Status of Women in the States 2015, which both updates and complements the 2014 Utah-focused research briefing.  The AWP presentation will give context and background for the initiative; highlight significant research findings in key dimensions of women’s lives; compare Utah women with women nationwide; note how gender disparities are compounded by race and ethnicity; and invite conversation about implications and opportunities for improving the lives of Utah women.

The goals of this program include:

Program will be held at the Family Justice Center on the YWCA campus. The building is a brick two-story building on the Southeast corner of 3rd East and 3rd South. You may park free in the YWCA parking lot to the East of the older building. If that is full, there is street parking on Third South and Third East, as well as an Ampco pay lot on the South side of 3rd South, between Second and Third East. Walk to the left of the Ghandi statue in front of the new brick YWCA building and enter through the side door.

As CEO of the YWCA Utah since 2000, Anne Burkholder has led the 110-year-old women’s membership organization through a series of changes and accomplishments linked to its mission and long-term strategic direction.  During her tenure the YWCA has expanded and enriched its pioneering family violence services, developed nationally accredited early childhood education, celebrated its Centennial, completed the most significant capital expansion in its history, and undertaken two recent initiatives in women’s leadership development (Real Women Run) and in issue education and public policy advocacy (Utah Women’s Well-Being Initiative).  Anne brings more than 25 years of varied nonprofit leadership and management experience to her work.  She has received awards for leadership and service.  She was appointed by Governor Herbert to serve on the Utah Women in the Economy Commission, and has served as board president for the Utah Domestic Violence Coalition, the YWCA Southwest/Delta Region, and the Utah Nonprofits Association.  Anne is an adjunct faculty member for the MPA program at the University of Utah.  Her studies focused on religion, philosophy and ethics, and she earned several graduate degrees including an M.Div. from Yale.